The Airmen of Note is the premier jazz ensemble of the United States Air Force. The band of world-class musicians was created in 1950 to continue the tradition of Major Glenn Miller’s band.

And, it has a legacy of brilliant composers and arrangers like Sammy Nestico, Mike Crotty, Alan Baylock and Gil Cray among others. In addition to the concert video, we have included tracks from some of its albums within this article and interview.

Jazz Artistry Now – This band has its own voice, seemingly can play anything in any style, and there is a documented ceaseless quest among its members for excellence in music while serving the military mission of their unit.

The Airmen of Note has a legacy of performing both, original compositions and refreshing treatments of classic work from past eras. This band reflects jazz artistry now at the highest level. It’s one of America’s best art ensembles – with its members proudly clad in U.S. Air Force uniforms wherever it plays. 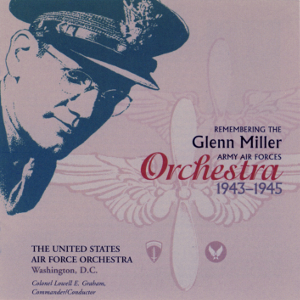 We interview Master Sergeant Ben Patterson, the director, and lead trombonist. We have a conversation about the band, its latest release and what it is like to have a job playing music with the United States Air Force Band.

Thanks for taking the time for this interview, Sergeant Patterson! 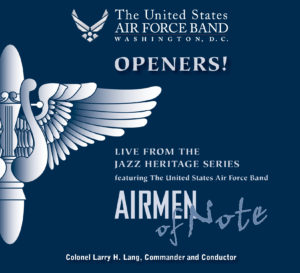 JAN: Will you give a brief essay answer about the mission and purpose of The Airmen of Note?

BP: As you noted, the Note was originally formed to carry on the important troop support mission of Major Glenn Miller.

The Airmen of Note of today still gives troop morale concerts, but the mission has expanded and evolved over the last 67 years to become a vital public affairs resource for the Air Force.

Now our main focus is spreading the message of what the Air Force is doing around the world, and striving to personify the excellence and precision that Airmen exhibit service wide.

It’s an honor to represent these folks that serve their country so faithfully, and we are so lucky to get to do it by making the music that we care about! 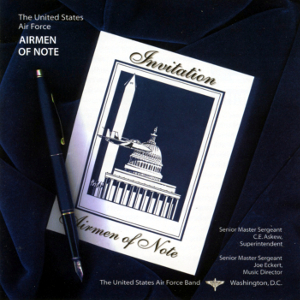 JAN: How long have you been a member of the U.S. Air Force Band and The Airmen of Note?

JAN: What was your most memorable performance with the band?

BP: Wow, with a group that is so packed full of amazing musicians there are so many memorable moments, it would be hard to narrow it down.

Since I’ve been on the band, we have played many of the major festivals and big conventions, performed at the white house, played with dozens of major guest artists and toured the Middle East performing for the troops.

Each experience has been amazing in its own way.

One thing we have been doing recently that really stands out is performing for groups of WWII and Korean War veterans that come to tour the nation’s capital as part of the Honor Flight program.

We wear our pinks and greens and do a personal concert of Glenn Miller-era music.

The look on the faces of these American heroes when they hear that music is something that will always stand out to me. 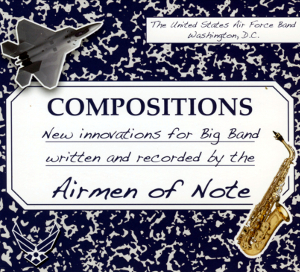 JAN: Does the band tour? If so, how often and where?

BP: The Note tours all over the continental US, generally in a spring and fall tour.

I have been to 47 states with the band.

We love to get out into communities and meet people across the country and hear their stories of family members that served or just talk music.

Educational outreach is an important part of our mission as well, and we especially enjoy meeting and working with young musicians when we travel. 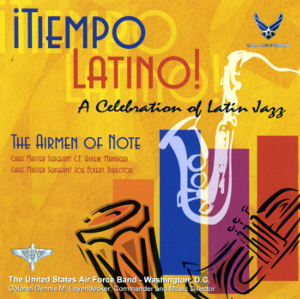 JAN: Is there a fee to attend a concert given by The Airmen of Note?

BP: Performances by all of your service bands are free and open to the public. 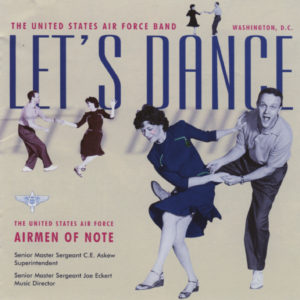 JAN: Can private citizens and communities request a concert by The Airmen of Note? If so, how?

BP: Information about requesting Air Force bands can be found on the Band’s website, http://www.usafband.af.mil 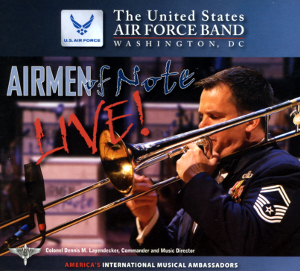 JAN: The Airmen of Note is one of the U.S. Military’s premiere ensembles. How do you select your band members?

BP: All of our members go through a rigorous audition process.

We advertise an opening, accept recorded audition materials, and invite a select few to a live final round where auditionees perform with the band.

After a thorough deliberating process by the band members, a winner is selected.

If approved by our commander, the winner enlists in the Air Force and attends Basic Military Training. 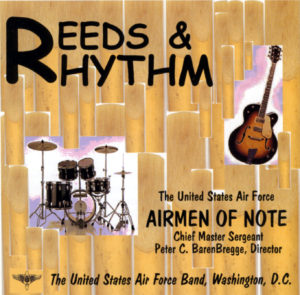 JAN: It seems your recordings and concerts have themes. How do you come up with these ideas and who decides what direction to take the band musically?

BP: As music director, I’m generally responsible for coming up with themes, but I like to solicit ideas from within the group.

The overall direction of the band is an ongoing process that involves the Commander and the Note’s leadership.

The Note has such a long history of invoking excitement by creating energy and showcasing the members’ virtuosity.

My focus as MD has been to stay true to this legacy and make sure people leave our concerts really charged up. 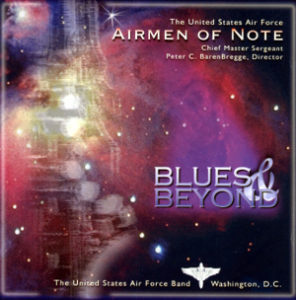 JAN: As musical director and the lead trombonist, you cover a wide range of duties to the organization. We noticed that many of the other band members have additional roles beyond playing their instruments. Why is this necessary?

BP: The USAF Band is a relatively small organization.

We can’t carry a large support staff, so members step up to take care of the business of running a band, whether it’s maintaining the library, writing arrangements, booking tours, handling marketing, or one of many other jobs that have to get done.

We like to keep our band busy (and we are!) but it takes a lot of behind the scenes work. 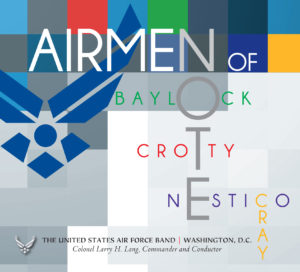 JAN: Your latest recording by The Airmen of Note was released in 2016 and features outstanding music and arrangements. How did the thesis for this recording come about?

BP: The Note has a wonderful legacy of writers, and that project was designed to showcase some works from the band’s chief arrangers, Sammy Nestico, Mike Crotty, Gil Cray, and Alan Baylock.

Unfortunately, because of personnel reductions, the Note no longer has a dedicated arranger.

Fortunately, many playing members of the band are also accomplished, writers.

JAN: How often does the band record?

BP: It varies, depending on squadron priorities and available budget funds.

I believe I have been involved with thirteen in my time with the band. 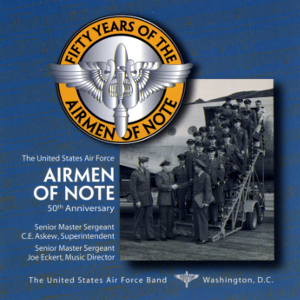 JAN: Are there any special projects in the works for The Airmen of Note?

BP: Always! We are currently producing our newest recording.

Scheduled to be released on Veterans’ Day, our new project is a tribute to iconic jazz musicians who served in the military.

When you see the list we came up with, including Coltrane, Joe Henderson, Wayne Shorter, and many other jazz greats, it really brings to light how people from all walks of life in this country of ours come together to serve.

We are also currently producing recordings of our latest Jazz Heritage Series concerts, which is an ongoing series where the Note performs with some of the biggest names in jazz. This year we had Peter Erskine, Nnenna Freelon, and one of my favorite trombonists, Marshall Gilkes.

We are also producing a new video product that should be released this fall featuring some of the band’s exciting new music. 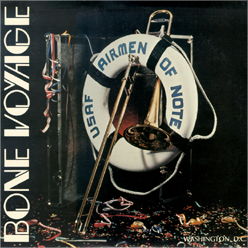 JAN: Where can readers get recordings?

BP: These days, there are many ways to hear the band.

Our website has many free and high-quality downloads available.

A simple search engine query will bring you many other free streaming services.

Followers of our Facebook feed will get some great behind the scenes glimpses of rehearsals and concert performances. 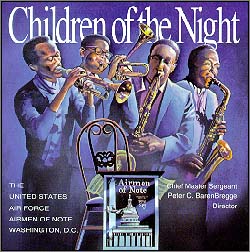 JAN: The military has had musicians as members since before the founding of the nation in 1776 if we consider the regimental musicians who served during the Revolutionary War. It seems music is an essential element to the military in any era. How does an organization like The Airmen of Note adapt to budget cuts and force reductions?

Still, we are constantly under threat of budget cuts.

We deal with the cuts as we can, without scaling back services whenever possible.

Fortunately, the Note has thus far remained intact as a full big band and hopefully will for decades to come.

It’s the kind of thing that once gone, may be gone forever.

It’s such a great part of our national heritage and one that is envied around the world.

One thing that really helps is when people write to our leadership or their elected representatives or even post on our Facebook page about what it means to them to have the band come to their community. 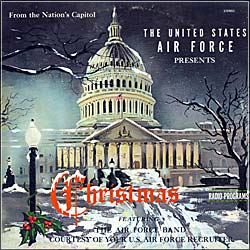 JAN: Some of our readers are aspiring musicians who view membership in musical organizations like The Airmen of Note as opportunities to work toward. What advice would you give any young artist who aspires to join your ranks?

BP: I think across the board, military bands are looking for really solid people who are not only great fundamental players on their instruments but are versed in many styles and possess the highest level of ensemble skills.

Spend as much time as you can listening, transcribing, playing with different people who push you, and above all practicing!

JAN: Thanks for your time and consideration of this interview.

A graduate of the University of North Texas jazz program, Sergeant Patterson earned a Bachelor of Music degree in jazz studies. During his undergraduate studies, he performed as the lead trombonist with the acclaimed One O’clock Lab Band under the direction of Neil Slater. He currently is lead trombonist for the Alan Baylock Jazz Orchestra, and a member of the award-winning Latin ensemble, Sin Miedo. He is also the leader, lead trombonist, and arranger for the Ben Patterson Jazz Orchestra.